Governor of Poker 3 is officially certified for fair dealing!

Governor of Poker 3 is a fair and trusted Poker game, that is why the Random Number Generator (RNG) used in our games has been certified by iTech Labs, a laboratory for all major online gaming jurisdictions. 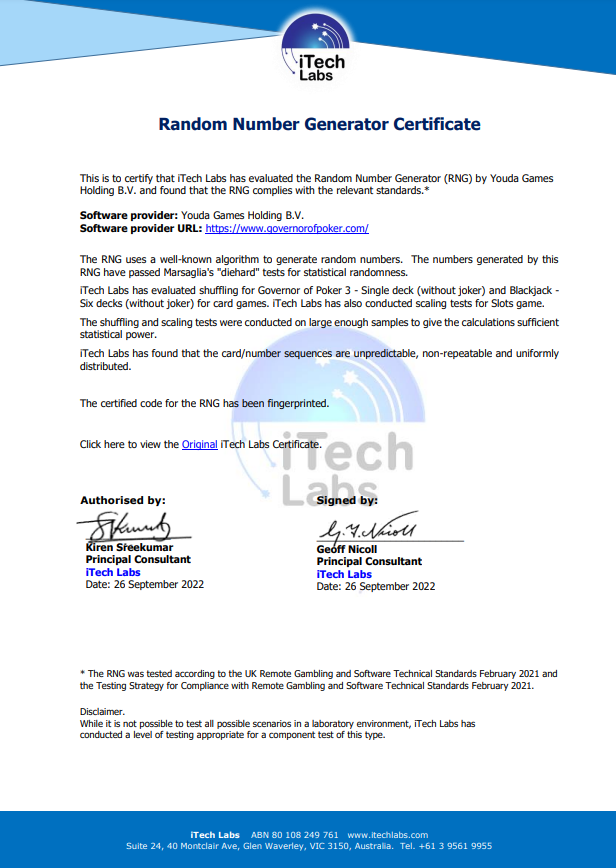 https://itechlabs.com/certificates/Youdagames/RNG_Certificate_UK_YoudaGames_26Sep22.pdf
The Governor of Poker Team
What does RNG mean?
Poker Games and Slot Machines are developed using statistical consequences. To guarantee the players that GOP3 is operating in a fair and logical manner, the game is programmed using a Random Number Generator.
Its role is to make sure that every gambling event such as card shuffling or spinning the wheel ends in a random result. The RNG ensures that the right random result is obtained.
Who is iTech Labs?
iTech Labs is an accredited laboratory for all major online gaming jurisdictions. iTech Labs consultants have been testing and certifying all types of games on a wide range of online gaming platforms for over a decade. They offer a full suite of testing services for online casino and social gaming platforms, including Certification, Quality Assurance, and Security Testing. For more information, please visit https://itechlabs.com/.
What does this certification mean to you?
As a player, we want you to know that Governor of Poker 3 is a fair game and doesn’t manipulate cards or doesn't favor any players. You can be assured that your experience is not controlled in any way. Everyone is treated equally and every undealt card has an equal probability of drawing.
Why does Governor of Poker 3 care?
Card Shuffling and scaling have always been a priority for Governor of Poker 3.
We also received some players feedback about the game being unfair and that the cards are being manipulated. To avoid any doubts for players, Governor of Poker requested iTech Labs to check the card shuffling and scaling for Slot Games algorithms.
Common concerns from players
Royal Flush
We received some feedback about the Royal Flush being the best hand on many Players’ Profiles. These players usually have played to Royal Poker, where you can play only with cards from 10 to Ace. The probability to get a Royal Flush is much higher than with regular Texas Hold’em.
Why do I get the lower prize more often?
Well not everyone can win the jackpot every time every day! In chests and on (free)spinning wheels there is a weight for each prize. Due to this the chance to win a jackpot is lower than winning the lowest prize. This prize selection is also part of the RNG certification and many people do win the jackpot prizes each day!
Why do I always get unlucky with the table cards?
Did you ever had the best hand on the Flop and the Turn, but another player got lucky and beat you with the river card? Even though the odds were in your favor? This is called a Bad Beat and can happen in poker, but it still feels really bad. So bad that players look at the RNG as the cause, but in reality, you are just unlucky and hit one of the less likely outcomes.
With free Social Casino Games, people will always risk more. They will play with a bad hand and reach the river and get lucky and might beat you. The only thing that you can do is to raise a bit before they hit something. Don’t get frustrated and stick to your tactic, as they can’t always be lucky!